Understanding how does word embedding work in a sentiment analysis model.

The goal is to show that how a trainable word embedding is updated during the training process of sentiment analysis task. The embedding dimension is chosen as 2. Therefore, we can directly observe the changes in the word embedding without using any dimension reduction approach such t-SNE. The values of word embedding are averaged out to summarize every given sentence with a fixed 2 dimension.Then, it is connected to a 5 layer MLP (Fully connected). The number of layers are selected without any extensive hyper-parameter search.

Only few interesting words are selected to be observed during training. As can be seen, at the beginning (i.e. epoch 1), every word is randomly placed due to the random initialization. However, eventually, the positive words move to the one side of the graph and the negative words move to the other side. After, some epochs the selected words are linearly separable which makes the job for the deep learning part much easier. Although, it should be considered that the demo is only for a selected group of words. 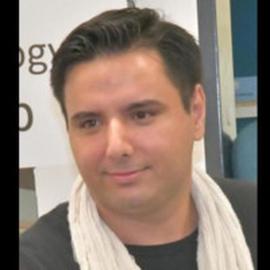